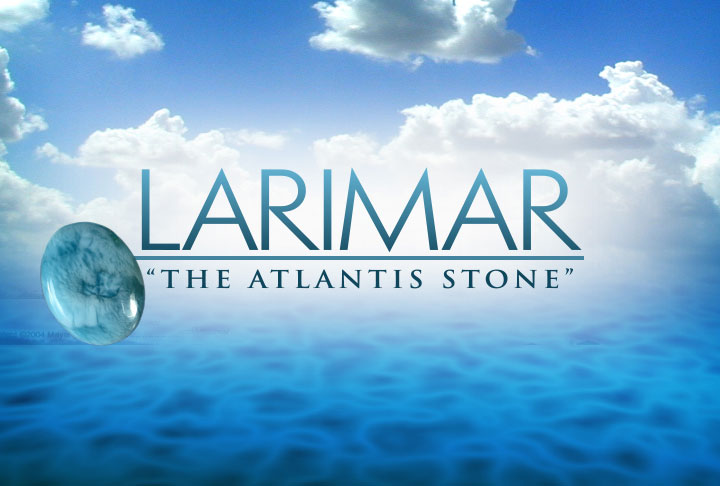 Gemstones capture our sight with their striking colors and composition. Larimar is not just an eye captivator, but a gem with metaphysical properties. It bears a tenfold energy that is said to heal the physical, mental, emotional and spiritual being of its beholder. Larimar healing is a natural way to gain peace and comfort. It’s a beautiful blue stone gifted for the whole world to experience.

A Bit of History

Known as the Stone of Atlantis or sometimes the Dolphin Stone, Larimar is a fairly recent discovery amongst gemstones. Located only on the island of Hispaniola in the Caribbean Sea of the Dominican Republic, Larimar is quickly gaining a reputation for being a healing stone with deep spiritual powers. Larimar may not be as ancient as some other stones, but its spiritual properties have already been well established.

It’s the only pectolite mineral of its kind because of its stunning blue color thanks to copper inclusions. Some Larimar stones have red markings, but the deep blue shade is considered the most valuable. Other kinds of pectolite are soft and fragile and what made Larimar a true gem is that it is tough enough to withstand carving and faceting.

Larimar gems are formed when hot gasses from the volcanoes pushed the crystalized minerals up into the volcanic tubes. It is dug deep down the volcanoes and only miners who are aware of a specific kind of tubes can extract the Larimar. Because of soil erosion, some gems are washed along the river and into the sea, resulting to gemstones that can also be gathered by the sea.

Larimar echoes the significances of its elemental origins in metaphysics. Its different shades hold different symbols. Each has its own energy that can be obtained when using Larimar. The colors are skin deep and is connected to what the eye can’t see. Every hue has a corresponding drive to heal whoever holds the stone. It is one of the only crystals that is thought to balance the polarities of Water and Fire with its cool color and volcanic origins.

Since it’s found in the Caribbean Sea, it reverberates the energies of water that subdue emotions. Some are not opened to tranquility even in the face of blue waters, so with the Larimar healing that bears deep emotions from the water element, you’ll feel a sense of calm and serenity. Beneath the beautiful presence of the sea that alone can heal, the effect is felt and not seen.

On the other hand, some Larimar gems that have red markings embraced by the blue and white colors represent the taming of red emotions such as anger and jealousy. While the white color symbolizes the air element and the connection of the stone to the soul. And as white and blue are joined together, it means Larimar links the heart and the mind in a spiritual level.

When we can’t decipher our thoughts, we feel stuck. When we can’t express our thoughts through words, we enter a loophole. And when we can’t voice out our words, we feel hopeless. Usually, this is treated with meditation, but with Larimar healing, it will quicken the steady bond of your mind and your tongue to convey what you really want to say. With Larimar’s help, every message flows and is delivered with such ease.

Associated with the throat chakra due to its cool, blue color, the Larimar stone is soothing and calming. The stone has a very distinct vibration that is centered in the throat chakra, but which can be felt from the heart chakra upwards when put in direct contact with the body. Larimar healing can help unblock communication channels, and assist you with achieving clearer communication in everything you do.

And when held to the heart chakra, Larimar can assist in unblocking emotional pain for the user. As a singer, you may wear it close to your throat so it can help clear your voice and enhance your performance. If you’re preparing for a speech or professing your love to someone, Larimar can make you express yourself better. Anything that has to do with conveying your thoughts in a smooth way, this gem is dubbed as the medium.

Connects You to the Divine

Because of its ability to link you to higher dimensions, Larimar is dubbed as a spiritual stone that opens up the earth and other realms for good communication. It’s easier to make contact with the Goddess with this kind of verve. A kind that amplifies your feminine power and your bond to the Divine feminine energy. With a successful contact, you may calm your emotions and relieve your stress. And with constant interaction, you will ripen your connection with nature.

By meditating with the Larimar Stone, your spiritual path will be vivified, it will shed light to your sense of purpose, and you’ll feel empowered to push on more than ever. Hold it as you meditate for a greater vibration to connect with the angels and the Goddess. It is said that it’s also used to aid ascension and wipe away connections from people that do you no good. Simply carrying it will release self-destructive energy that you’ve been holding on to which will clear paths for a healthier elevation process.

Nothing beats the natural way to communicate, but the Larimar Stone is created only to vivify energies and wash dusty spiritual lanes. It does not alter the consciousness or change routes. Its only role is to aid you in better connecting with the Divine.

In time, the stone may help you release things like fear, resentment, and negative attachments. Regular use of the Larimar stone can also help you to forgive others, and find better balance within yourself. Physically, Larimar can further assist you in calming and stress relief by helping to lower your blood pressure. At the same time, simply placing or holding the stone against a place of pain – particularly in the throat region – can help to relieve it.

For some who experience the side effects of kundalini activation, the Larimar Stone can help soothe your energies as it takes away negative entities and attachments. If you have concerns controlling rage, this gem has a strong healing vibe that cools the emotions. It also removes energy blockages in the chest, neck, head, and throat area. Best of all, it is said to help with depression and bipolar disorders as it mends closed pathways for divine communication.

The Larimar gem’s vibration enhances creativity and opens the mind to new trails for self-development as it bridges the true self to a higher purpose. It’s also believed to attract your “Blue Flame” as it lessens the critical side of the mind to a more open heart. It allows you to thread lighter and not worry too much of labels and standards and see with a balanced mind and heart.

How to Use It

There are many ways to use the Larimar gemstone in your life. It’s made into a variety of different styles such as jewelry, cabochons, and home decorations, but Larimar healing is the most popular way to glorify it. Wear this stone to always keep its balancing energy within your auric field or use it in meditation to increase your vibrations.

Another way to go about aligning yourself with the spiritual properties of Larimar is to gaze at its cool blue color and white veins. This can be done by holding a Larimar jewel in your hands or carrying it in your purse until you’re ready to use it. Or you may simply look at your hands or wrists during meditation to help you focus and gain better clarity when you’re wearing a Larimar jewel.

Because the stone can bring so many distinct benefits, you may find that sporting a Larimar ring or bracelet can allow you to have access to the stone at any time of day. Therefore wearing a Larimar necklace, pendant, or a pair of dangling Larimar earrings can help you gain greater wisdom, as well as help to better unlock Larimar’s metaphysical properties.

Add Larimar to Your Life

Larimar is one of the most powerful healing stones being mined today. Thought to be the predicted stone that links the Caribbean to Atlantis, Larimar’s properties are gaining a lot of attention amongst those looking to harness the spiritual power of natural stones and gems. Add some Larimar to your daily meditation or wear it religiously to increase the clarity and balance within your life.

The only way to prove its power though is to own one yourself. And if it doesn’t work like it’s dubbed to be in the whole world, its cerulean shade touched with white embers reminiscent of the Caribbean Sea is a prize in itself. When you see the waters and sky being animated in the stone, we bet it will awaken something inside you – without taking anything or traveling far way.

Choose which one suits you in our Larimar collection here.